For a few years in the early eighties I lived just over the hill from Hunter in Woody Creek, Colorado but did not know him, even though he had always been one of my heroes. Reading the installments of Fear and Loathing on the Campaign Trail, 1972 as they appeared in Rolling Stone inspired my first film If Elected… (broadcast on PBS in 1973). Hunter was a hero for me because he was a great, witty writer with an unique view of American culture and politics, and also because he seemed to deliver, to get the work done, despite his love of drugs and drink. Who wouldn’t want to be live like that if they could?

Ten years later I was right next door and looking for a subject for a new film, having just finished two for the series “Frontline” on PBS – A Journey To Russia, and The Bloods of ‘Nam.  When I heard that Hunter was working as the Night Manager of the Mitchell Brothers’ O’Farrell Theater in San Francisco, I called David Fanning, the Executive Producer of “Frontline,” and suggested a film about Hunter and his work as the Night Manager of a sex theater. Fanning was surprisingly receptive to the idea, and said that he would consider it if I could get Hunter to agree, but I’d have to pay my own expenses to get the project going.

I was able to make contact with Deborah Fuller, Hunter’s assistant at the time (and into this century as well) and made my pitch on behalf of “Frontline.” Then I waited to hear from the Doctor. A few days later the phone rang at 3am. (The beginning of decades of 3am calls, but as Sheriff Bob says, “Now when the phone rings at 3am it can only be trouble”) Hunter said he was interested in doing a film and invited me to visit him in San Francisco for the weekend, as long as I brought Deborah along with me. Elated, I booked two plane tickets and two hotel rooms that March of 1985.

Deborah is an unrepentant refugee from the sixties. Having lived in a commune in Northern California, she seemed to have the right tolerance for Hunter’s life style. She was also fiercely protective of him and his privacy. (see my story Never Call 911 and The Night We Shot Keith Richards Part 1 herein for more about Deborah)

Our hotel was on California Street, just a few blocks from the O’Farrell, but Hunter was staying across the Golden Gate Bridge in Sausalito where we met him for dinner the first night. For an icon of the sixties, he chose an odd, country club like restaurant filled with wealthy retirees with fancy, blue hair bee hives. A bit like a Steadman drawing from Fear and Loathing come to life, I thought, as Hunter entered, wearing shorts, and accompanied by Maria – a short, dark-haired beauty that was undoubtedly one of the great loves of his life. Maria was the student coordinator for one of Hunter’s appearances at the University of Arizona, and had probably not left his side for long since she picked him up at the airport one fateful day in Phoenix. 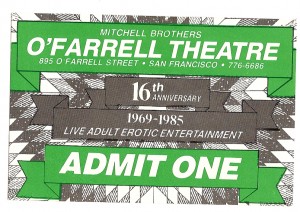 Hunter was charming, and immediately exceeded my expectations, except his mumble was annoyingly hard to understand.

The film producer in me flinched, but I figured that the right sound man and a bit of direction would solve that problem. Little did I know that his mumble would be one of the main objections at HBO when I showed them the Gonzo Pilot a year later.

After dinner we went with the Night Manager to work. The O’Farrell Theater was owned by Jim and Artie Mitchell, the creators of the seminal film Behind the Green Door with the Marilyn Chambers. Hunter wrote about them eloquently in the beginning of Kingdom of Fear:

Jim and Artie Mitchell were as bizarre a pair of brothers as ever lived. I loved them both. But the sex business had made them crazy…They were deep into San Francisco politics, but they were always in desperate need of sound political advice. That was my job. The Night Manager gig was only a cover for my real responsibility, which was to keep them out of jail, which was not easy.

With Hunter’s help, the Mitchells had made pornography and live sex shows a cause celebre and were now winning the battle with Mayor Diane Feinstein.

I came to San Francisco hoping that Hunter’s fascination with the sex business was essentially political, not unlike the anarchists of the early twentieth century who believed in free love as the ultimate liberation from societal domination of the individual. I was not disappointed. Warren Hinkle was also at the O’Farrell that weekend. As the legendary editor of Ramparts and then Scanlans, Hinckle commissioned the first piece of Gonzo Journalism from Hunter. (Look for Hinckle’s new book this winter, Who Killed Hunter S. Thompson?) 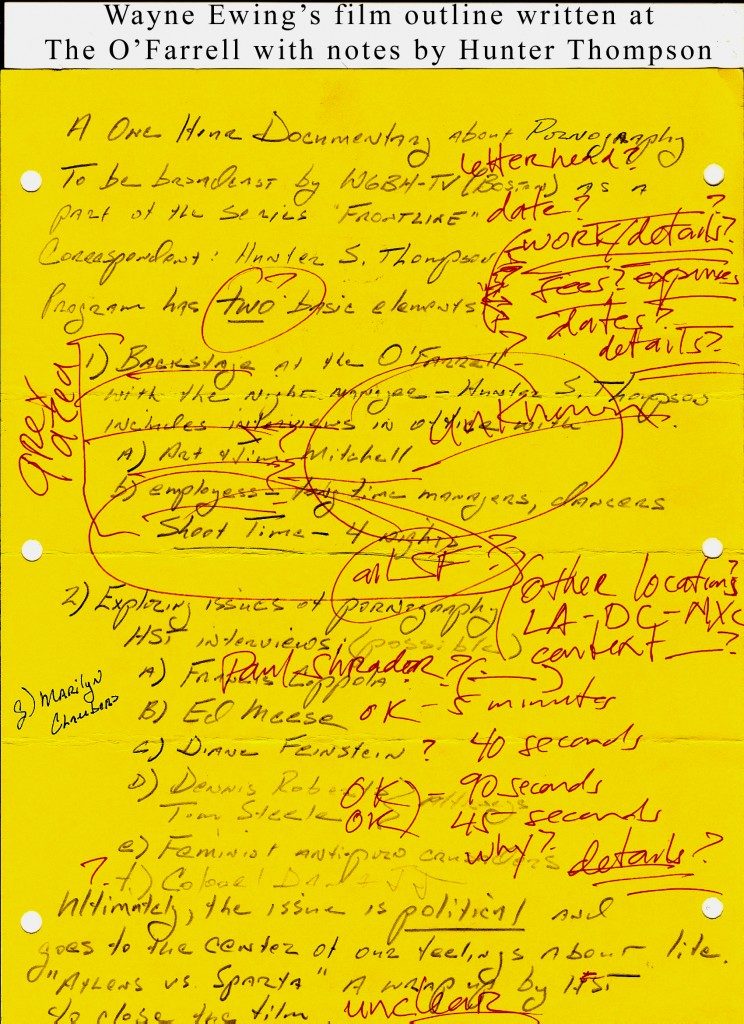 The Night Manager’s office was just above the entrance on the second floor with a large semi-opaque picture window looking out on O’Farrell Street. There was no desk. Instead a pool table filled the room, and the walls were peppered with dings and holes from a wad shooting pistol the Brothers had given Hunter. Beautiful, naked women walked in and out from the dressing room next door, sometimes wearing at most slender g-strings for decorum, between their stints downstairs.

Hunter insisted that Deborah and I take the full tour of what he called “the Carnegie Hall of public sex in America.” On the first floor were three venues – the New York Stage where one girl would dance while others gave lap dances to the audience, the Copenhagen Room where patrons sat around the perimeter with flashlights and girls performed in the middle or on your lap, and the Ultra Room, a room with private cubicles from which you watched while the girls did each other in the box and you fed them tips through slots in the glass.

“Be careful not to touch the walls,” one girl thoughtfully warned Deborah with whom I shared a cubicle.

Deborah and I bonded in the way that only the newly acquainted can when confronted with raw sex and confined to a sperm-lined box three feet square. Back upstairs, Hunter wanted a full report. I tried to be blasé, but Deborah took a comic approach to the experience which Hunter clearly liked more. Maria was writing intently in a school book with ruled paper.

“What are you writing,” asked Hunter.

“Just making some notes after watching a group of Japanese men who got off a tour bus” she replied.

The next night we all went to dinner with Jim and Artie, and a couple of girls from the O’Farrell at a Mexican restaurant far out on Geary Street. I sat between Jim’s wife who seemed like a normal suburban mother/housewife and one of the girls from the O’Farrell who wanted to know where to get cowboy chaps for her act. Shortly after I first published this blog in 2009 that girl contacted me and identified herself as Simone Corday.

[Simone has written a fascinating memoir of her life at the O’Farrell entitled 9 1/2 Years Behind the Green Door and has a web site where you can buy the book. Simone says that I remembered the scene and dialogue quite accurately]

When Hunter heard her asking about wardrobe he interjected, “Do you still have that gorilla suit, Simone?”

“Oh yeah,” purred Simone. “One of my favorites.”

“When we go back to the O’Farrell, I want you to wear both and do another girl on the New York Stage,” commanded the Night Manager.

“Anybody I want?” she asked.

“Any body who wants to as well,” he said.

A strange joke to impress me, I assumed and concentrated on getting out of the restaurant balancing a half dozen large Styrofoam containers of margaritas Hunter had insisted on ordering to go. A wild ride down Geary in an open convertible with Hunter driving took us back to the O’Farrell. I sat in the back clutching the margaritas, trying to pass a joint in the horrific slip stream, thinking that this is just about what you would expect after reading his books, and regretting I wasn’t filming right then. If it was just ten years later when cheap digital video became available, I would have been shooting my brains out. Today the distinction between research and principal photography gets lost. Back then, it was a given, and this was pure research.

The research got even stranger back at the O’Farrell. I lost half the margaritas on the way inside and then Hunter ignored the rest when I offered them up. Instead, he was intent on taking his place on a stool upstairs next to the spot lights above the New York Stage. Down below a young blonde was finishing her act when Bambi entered wearing her full gorilla suit and a strap on dildo. The blonde stayed to play out the scene with Simone as the Night Manager had instructed. Even given the conditioning of the Ultra Room, I was still amazed and shocked.

As the girls left the stage, I turned to Hunter and asked, “What did you think?”

“Not what I expected,” he said, and walked away to his office.

I wondered what the scene lacked. It certainly worked for me. But that was Hunter’s nature; he wasn’t an easy man to please.

When I got back to Woody Creek on Monday, I called David Fanning at “Frontline” to report a great work-in-progress, but his reaction was also not what I expected.

“Forget about it. I must have been on drugs last week. How would I explain to Congress using Federal money to do a show about the Night Manager of a sex theater?”

“But it’s more than that. It’s about politics and personal liberation, and…”

“You’re not going to talk me into this, so don’t even try,” said Fanning, rudely hanging up on me.

And that’s one of the last times anyone at “Frontline” would ever take my call even though my last film for them, The Bloods of ‘Nam, was nominated for an Emmy.

Just as well, since it made me realize that to make a film about Hunter I would have to do it on my own, and over a long period of time. In the end, Breakfast with Hunter only took 18 years and was a hell of a lot more fun than another “work-made-for-hire” for “Frontline.”