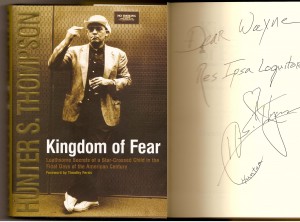 Amanuensis is an interesting word. I discovered it this morning in The New York Times obituary for Judith Peabody, a New York socialite who devoted her life to philanthropy, caring for AIDS patients, and, strangely enough, Lenny Bruce.

After reading an article about the profane comedian’s legal troubles in the 1960′s she wrote him a check and became his “part time amanuensis, helping him with his legal research,” according to The Times.

An amanuensis is a scribe or writer’s assistant “employed by an individual to write from his or her dictation or to copy manuscripts” (from Encarta World English Dictionary) – exactly what I came to be with my camera for Dr. Hunter S. Thompson over a very long period of time. Writing was never easy for Hunter. I don’t think it is for anyone, no matter how successful they are. But, Hunter took the task to extreme levels of frustration and exasperation, as you can see in my latest film Animals, Whores & Dialogue.

When the going got too tough to actually get the words directly from his brain onto a piece of paper, Hunter would fall back on a device he discovered early in his career – a tape recorder. Perhaps that’s why he described a Gonzo journalist as having the “eye and mind of a camera.” If you could just record events and your interaction with them, then there would be no need for the pain of writing.

When we were working on Kingdom of Fear, the pain and frustration levels were extremely high. Hunter would recall, almost proudly, how blocked he became trying to finish Fear & Loathing on the Campaign Trail 1972. Holed up in San Francisco’s Seal Rock Inn after the campaign, Hunter simply could not write the conclusion to his bi-weekly reports from the Presidential race that had been serialized in Rolling Stone. In desperation, his editor recorded his conversations with Hunter and then transcribed and edited them into their final form.

Those who might think less of Hunter as a writer for relying on this method, might consider the case of Samuel Langhorne Clemens, aka Mark Twain, who often worked in exactly the same way, especially towards the end of his life. In a review of the Autobiography of Mark Twain, the first volume of which is coming out this November, Larry Rohter reported in The New York Times that

Twain dictated most of it to a stenographer in the four years before his death at 74 on April 21, 1910. He argued that speaking his recollections and opinions, rather than writing them down, allowed him to adopt a more natural, colloquial and frank tone, and Twain scholars who have seen the manuscript agree.

Kingdom of Fear was as close to an autobiography as anything Hunter ever wrote, even though much of it was pulled together out of the basement from existing published and unpublished material. Given the eclectic nature of those pieces, we were desperate for some sort of thread to tie the book together, just as I use the scene of Hunter writing a column for ESPN over one long night as the glue that holds together Animals, Whores & Dialogue.

The original connective tissue for Kingdom of Fear was to be the story of “The Witness” – the 99 day saga of the early nineties when Hunter made the mistake of letting a woman who prided herself on producing pornography into Owl Farm. As a result, Hunter was busted for sexual assault and a litany of drug charges, and fought a winning battle for 99 days to stay out of the system.

Nazi Penetration has always been one of my favorite films of the sex genre. It is a story of shipwreck, sadism, and absolutely hopeless female victims confined on a tiny tropical island with only a Nazi war criminal and two cruel Japanese nymphomaniacs to keep them company. The naked white girls are innocent prisoners of some long-forgotten war that is never mentioned in the movie except by way of the frayed and often bottomless military uniforms worn by the demented villains….

And, Hunter’s description of his role in the sex business as the Night Manager of the O’Farrell Theater (where we first met as you can read in The O’Farrell herein) is classic Gonzo:

The Night Manager gig was only a cover for my real responsibility, which was to keep them [the Mitchell Brothers) out of jail, which was not easy. The backstairs politics of San Francisco has always been a Byzantine snake pit of treachery and overweening bribery-driven corruption so perverse as to stagger the best minds of any generation.

We used to howl in the kitchen when those first nine pages were read and re-read, but unfortunately that went on for many months without any more new material being written. Hunter was desperate to finish the book; he needed the money naturally. And, I was desperate as well. I wanted to finish my film –Breakfast with Hunter – and release it at the same time as the book.

Thus, we came to fall back on the tried and true method of extracting truth, wisdom, and a good laugh out of the Doctor – recordings, but now video as well as audio – ‘cause I figured if I was going to devote a year or so of my life to the book, I should at least get something for my movie in return.

I suggested we have Sheriff Bob Braudis come to the kitchen and interview Hunter about The Witness, since he had been intimately involved on the law enforcement side when Hunter was busted. The Sheriff agreed and spent two long afternoons interviewing Hunter. I filmed the scene with two cameras – one that I would leave running on its own on Hunter and the other handheld moving around on Bob. I then took that footage and transcribed the audio, and Hunter and I and Anita and Jennifer Stroup – another long-suffering, amanuensis; but young, blonde and far better looking than I – edited and massaged those transcripts into what became the second Witness section in the book (pages 116 – 142). In the end we finished the book, Hunter got paid, and I captured a very poignant moment with the two big men.

When I filmed the scene, I never even saw the gun in Hunter’s hands since I was framing the Sheriff at that moment. Years after he shot himself sitting in the same spot in the kitchen, I discovered the footage while editing Animals, Whores & Dialogue. It’s still not easy for me to watch, but that pain is lessened by the look in the Sheriff’s eyes as he listens to his best friend sum up the meaning of his life.