This week, the New York Times Travel Magazine has a glossy article on “The Stunning, Sacred Retreats of California” featuring the Esalen Institute of Big Sur where “in 1960, a 22-year-old aspiring writer named Hunter S. Thompson lived on the grounds, working as a gun-toting security guard…” That is true, and while Hunter is inevitably linked with Las Vegas, the thin, heavenly strip of California coast known as Big Sur inspired Hunter to produce both his first and last published writing.

Hunter came to Big Sur in search of Henry Miller and to write his first novel, The Rum Diary. He never met Miller, but did find the perfect gig, working as a caretaker for the Murphy family which owned 500 acres of rocky beaches, cliffs, redwoods and hot springs. Michael Murphy had just started the Esalen Institute, and the hot springs were an attraction for the uninhibited and unconventional. According to William McKeen in his book Outlaw Journalist, Hunter slept most of the day and wrote all night, but he did police the hot springs, causing complaints about his armed aggression on the trespassers who were often exclusively male.

In an August, 1961 letter to a friend Hunter wrote:

I am surrounded by lunatics here, people screeching every time I pull a trigger, yelling about my blood-soaked shirt, packs of queers waiting to do me in, so many creditors that I’ve lost count, a huge Doberman on the bed, a pistol by the desk, time passing, getting balder, no money, a great thirst for all the world’s whiskey, my clothes rotting in the fog, a motorcycle with no light, a landlady who’s writing a novel on butcher paper, wild boar in the hills and queers on the road, vats of homemade beer in the closet, shooting cats to ease the pressure, the jabbering of Buddhists in the trees, whores in the canyon, christ only knows if I can last it out…
(from The Proud Highway, p.261)

The novel remained unfinished, but Hunter did produce his first paid magazine article. “Big Sur: The Topic of Henry Miller” appeared in the October, 1961 edition of Rogue magazine, a slightly sleazier version of Playboy at the time. Here’s an original copy that we found on Ebay for $28. What a deal! 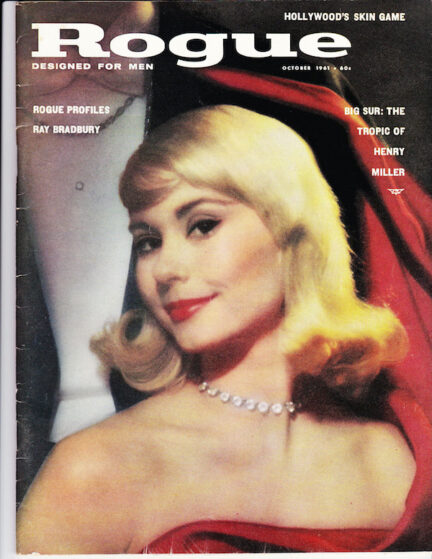 The Rogue article may have been a negative lesson in learning his later axiom that “politics is the art of controlling your environment” since Hunter clearly lost control in Big Sur. Many of the locals were insulted by his observations, and the grande dame of the Murphy clan was so outraged that she evicted Hunter and his wife Sandy from their caretaker’s cabin in paradise.

Hunter’s letter of protest to Mrs. Murphy is apologetic, yet still filled with hubris.

Your visit yesterday was quite a shock to me and I thought I should write this letter to assure you that I am not at all happy with the idea of being evicted and will go to great lengths to avoid it.

Primarily, I shall call a halt to my shooting and keep the demon rum at an arm’s length – at least at a safe distance.

It’s my considered opinion that reports of my wild behavior are greatly exaggerated. I have never threatened anyone with a whip, for instance, and indeed the only violence I can recall occurred when I was attacked by a large gang of homosexuals. Perhaps Mrs. Webb has visions outside the realm of religion – this would not surprise me at all.

At any rate, I shall fix Kay’s windows and, as you suggested, retreat down to the rocks or up in the canyon whenever I feel the need to shoot. You sounded very worried about the gun, but it is only a .22 caliber pistol, the smallest you can buy. It is duly registered in Sacramento and, since I never carry it concealed, I don’t need that kind of permit. I assure you that it’s quite legal.

Perhaps now, with summer coming to an end, it will be a bit more peaceful here. The only time I’ve had any difficulty was when the place was overrun with people. Also, when Mike and Dick take over the lodge I think the situation will improve considerably down here.

Thanks for your patience. You might be interested to know that I sold a short story today and am more than halfway through my novel. For the next few months I shall work exclusively on that and abjure all violence and wild drinking bouts. Then, when I want some excitement, I’ll take a vacation to the West Indies and drink rum and fight with sharks. Until then, I remain,

Mrs. Murphy did not relent, so Hunter retreated to Louisville to try and finish The Rum Diary. Click on the 10 Rum Diary Backstory blogs on the right to watch Hunter finish the book and work with Johnny Depp to make it a movie.

Thirty-six years later, the Beast returned to the Murphy property on Big Sur in the dead of the night. In October, 1997 Hunter and I were staying at the Chateau Marmont in Hollywood. He had finished his cameo appearance on the set of Fear & Loathing in Las Vegas and was in one of those clear-headed times when he was about to replace one girlfriend with another. Johnny Depp had lent him his Porsche, and I could monitor his movements from my room at the Chateau with a window above the driveway by the distinctive, deep sound of the Porsche’s exhaust as it left and then returned close to dawn.

Every night I was amazed that the Porsche returned to the stable unharmed, often from Tony Yerkovitch’s Buffalo Club. An intelligent, young girl, named Sara, who had written him a fan letter would usually be in the passenger seat. She appears in Breakfast with Hunter when Hunter checks into the Chateau earlier in 1997 on a mission to fire Alex Cox, the first director of Fear & Loathing in Las Vegas.

Hunter had another gig up the coast at Pebble Beach in a few days speaking to a medical conference (true, believe it or not ) and wanted to drive the California coast in a convertible with a girl at his side, but that girl was not to be Sara. Instead in one of the smoothest girlfriend switches I have ever witnessed, Hunter flew in Heidi – a new “assistant” from Aspen – to make the drive. I had a Cadillac convertible with a Northstar engine delivered to the Chateau, and Hunter and Heidi took off like honeymooners up the California coast with Big Sur as their destination. I called Johnny and told him his Porsche was intact and available for pickup in the Chateau garage, and then retreated to my boat in Ventura to recover after a week at the Chateau with Hunter.
I imagined them waking up in Big Sur in the natural beauty of cliffs, sea surf and sunshine. Instead, Heidi called later the next day from a Best Western Motel in Monterey. Evidently, they did make it to Big Sur sometime after midnight. Hunter drove the Cadillac into the Esalen Institute, waking up people who had traveled from around the world for peace and tranquility. He demanded a room, and was given one.

According to Heidi, within a few hours Hunter was, as he would say, “like an ape in chains.” Esalen was too quiet, and the pressure for the Beast to be silent was simply too overwhelming. So they fled in the Northstar up the coast another hour or so to Monterey and checked into a Best Western motel. Along the way, they must have stopped for tacos, since that becomes the next to last scene of “Fear & Loathing at the Taco Stand” which ends his last book, The Kingdom of Fear. 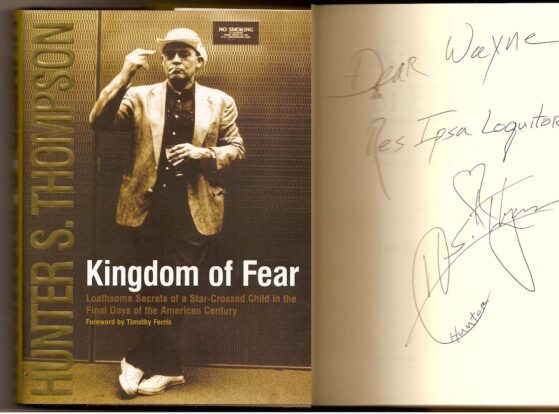 I’ll take the credit for placing that piece at the end of Kingdom of Fear. Having worked on the book with Hunter (and a parade of assistants) for almost two years, we were struggling in 2002 on how to end it. Hunter wanted to use a piece he wrote for Time Magazine about a quest with Heidi for redwood trees in Northern California, but I thought another Time piece he had written called “Fear & Loathing in Hollywood” would be more fitting. I won the negotiation by agreeing that we could change “Heidi” to “Anita” and the name of the piece from “Hollywood” to “Taco Stand.” I was desperate to end the book with Heidi’s remarkable insight after just one day on the road with Hunter:

I shook my head softly and drank some gin.

“It’s because you have the soul of a teenage girl in the body of an elderly dope fiend,” she whispered.

“That is why you have problems.”

I stared out to sea and said nothing for a while. But somehow I knew she was right. Yes sir, I said slowly to myself. I have the soul of a teenage girl in the body of an elderly dope fiend. No wonder they can’t understand me.

And so it ended where it began for Hunter, in Big Sur sitting on a rock above a waterfall with a young girl analyzing his sexuality not far from the hot springs where he once attacked homosexuals.

“Will the Circle Be Unbroken” was one of Hunter’s favorite tunes.

I still miss him.