“Have you noticed how no one comes to the door unannounced since I shot Deborah?” Hunter asked with an odd sense of pride.

About a month had passed since the shooting incident at Owl Farm which you may remember since it was covered by over 800 news outlets worldwide. GONZO WRITER SHOOTS SECRETARY was a popular headline and essentially true, but The Aspen Times was particularly misleading with their banner HUNTER THOMPSON ALLEGEDLY SHOOTS WOODY CREEK WOMAN. You’d think Hunter had done a drive-by shooting on the Woody Creek tavern, leaving some biker bleeding through her latex. 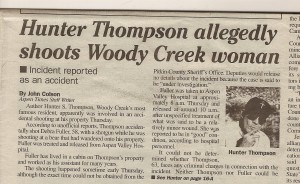 In fact, the real story was far stranger, and as the only one to witness it other than the victim and the shooter who can no longer be held accountable, I’ll tell you the truth.

Hunter and I were working alone on the second letters book – “Fear & Loathing in America” – that long night into the morning. My habit was to wait until about 3am when the cops were busy processing their drunks picked up after the bars closed in Aspen and then head for my cabin up the Frying Pan River. But if the work persisted I would give up on my two beer rule as dawn approached and sleep next door in Deborah’s spare bedroom for a few hours and then head home. Even though I usually left for Owl Farm in the dark I always brought my sunglasses for the possible ride up river against the sun.

At about 6:30am in this first year of the new century Hunter and I shared a smoke and I headed for Deborah’s cabin about hundred feet from the main house. The soft bed in the spare room could put anyone to sleep quickly, and I was down within minutes. Then the phone rang, waking me slightly. I heard Hunter’s voice mumbling into Deborah’s answering machine. His usual instructions for the day shift, I figured, slipping back into sleep and then BANG!

One gun shot followed instantly by Deborah screaming, “You shot me, you bastard!”

Rising up, I started to run out of the bedroom and then realized I was naked. The question arose in my mind whether to continue or stop to put on my pants. “Get the pants,” I thought, figuring that I would not have a chance to retrieve them for some time.

Deborah was still standing in the front door way, just beginning to bleed from multiple shot gun pellet wounds to her arms and legs. The color had drained from her face, but Hunter looked even paler as he rushed up to the door with the shotgun cradled in his arms.

He never looked sadder in all the years I knew him. Hunter truly loved Deborah. She had been with him since the early 1980′s. Hunter also prided himself on being a good fire arms instructor. The idea of shooting anyone accidentally was abhorrent to him and as far as I knew it had never happened before. (He once blew out a door frame the I was standing in with a 12 gauge, but that was on purpose and another story.)
This was a true dilemma for me. “Never Call 911. Never. This means you!” was inscribed on the refrigerator at Owl Farm in his artful script, reminding me of the cardinal house rule every time I went for a beer. To call 911 would be to place all three of us “in the system” and start a legal log rolling that none of us could stop.

Looking at Deborah, I tried to assess whether she was about to go into shock. For a multiple gun shot victim she still looked pretty steady on her feet, so I figured the best strategy was to get her into my car immediately and take her directly to the Aspen Hospital. I rationalized that even if I called 911, I could get her to the emergency room faster than waiting for an ambulance. The local paparazzi were known to scan the police frequencies for celebrity fuckups just like this. No need to alert the media. I just hoped she would not bleed out too much during the ride. Dabbing at her wounds now with a towel I found no heavy, arterial bleeding.

“Can you make it to the hospital,” I asked.

“I guess I’ll have to, won’t I, Wayne” replied Deborah sarcastically through clenched teeth. She’s one tough lady. How else could she have survived twenty years with Hunter?

Leaving Hunter behind to deal with the authorities who we knew would inevitably arrive to investigate the scene, Deborah and I headed for the hospital through morning rush hour on Highway 82 (which the residents of Aspen have fought to keep as inaccessible as possible in the weird belief that traffic jams will keep out workers and tourists in cars.)

I called Sheriff Bob on his cell phone, assuming that this was not a violation of the 911 rule and that he could pave the way for me at the emergency room. Gun shot victims tend to produce many questions.

“Hunter shot Deborah,” I said as soon as Bob answered. “She’s alive. I’m driving her to the hospital.”

Sheriff Bob loved Deborah at least as much as Hunter and I.

“That sonofabitch,” Bob swore. “What happened?”

By driving on the shoulder of the road I was able to skirt the workers waiting in their cars to serve rich people, and was proud that I made what was usually a 20 minute drive in about 10. We parked in front of the emergency room, and Deborah said she could still walk, so I lead her inside.

“What’s wrong with her,” asked the receptionist behind the desk where nurses were milling about on a quiet morning for an ER.

Leaning over the desk so that no one else could hear, I said softly, “She’s been gun shot.”

The male nurse behind the desk picked up a RADIO microphone broadcasting to the world on the police frequency “Gun shot victim in the ER.”

So the media was alerted and I might as well have called 911 in the first place, except I did get Deborah to the hospital quicker than the system would have. Now I just had a bloody car to deal with, the sheriff’s deputies who were beginning to descend on Owl Farm, as well worry about Deborah’s wounds which turned out to not be so bad, all things considered. She still carries shotgun pellets in her legs as far as I know. Wasn’t worth the trouble to take them out.

Hunter on the other hand faced a world of trouble. Sheriff Bob was not going to let him get away with a shooting, especially if he meant to shoot Deborah.

The truth was, and I firmly believe this, that after I left Hunter at 6:30am he was about to go to bed as well and looked out towards Deborah’s cabin and saw a bear around the dumpster between the two cabins. He went back into the kitchen and called Deborah’s phone, leaving the message which turned out to be “do you see that bear outside your house?” Deborah heard the message, and got up to see the bear.

Meanwhile Hunter had grabbed a shot gun. He went to his side porch and shot at the ground just behind the bear to scare it off, just at the exact moment that Deborah opened her screen door. She wasn’t actually in the line of fire, but the shotgun pellets hit the open screen door frame and ricocheted into her arms and legs. Fortunately, she had not stepped outside or she would have been hit directly and more severely wounded.

In the end, Deborah refused to press charges against Hunter, all was forgiven, and I’ll still never call 911. Never!