The Aspen Times has a picture of a bobcat on the front page this snowy January day after “Blue Monday” – the third Monday in January, considered the most depressing Monday of the year by the media. The bobcat in today’s news was crouching in the snow in a field not far from my unfortified compound somewhere near Carbondale and he appeared quite cuddly.

Bobcats remind me of another Blue Monday more than a decade ago, back in the nineties at Owl Farm with my friend Dr. Hunter S. Thompson. And that memory suddenly answered the question that I have been pondering about Hunter for more than a month.

“What did Hunter like to do outside?” asked my friend Brian Buckman.

Since Hunter spent most of the last twenty years of his life glued to a high chair between the stove and counter in his kitchen, I did not have a ready answer. But today it came to me after seeing the bobcat.

Hunter loved to go outside and shoot, especially to kill something that he felt threatened him.

“People know that I will shoot,” the Beast would declare late at night with pride. And it was certainly true, as I knew from having to deal with an innocent victim of his trigger finger. (see my vodcast “Never Call 911″ )

The bobcat that haunts me still was certainly a victim, but whether he was innocent or not you will have to judge. Outside on the porch of Owl Farm that January Blue Monday it was cold, so cold even a starving, yet still cagey bobcat might be forced to take a chance.

My brother Andrew and I were at Owl Farm that night, along with Deborah Fuller – Hunter’s secretary since the early eighties – and a journalist and photographer from London. The Brits were there to talk about the release in England of Hunter’s long lost novel The Rum Diary, now finally to be released as a film starring Johnny Depp in 2010.

Hunter was quite crafty about having his picture taken. From the beginning, he had an instinctual sense that branding himself properly was a key to success and fame. Thus, the Gonzo symbol, the cigarette holder, the Tillie Hat, etc. were all elements of his well known image that had to be arranged properly before any photograph could be taken. Deborah and I were charged with making sure he looked just right, and he constantly threatened terrible retribution if we failed.

“If my glasses are crooked, I’m going to hurt you,” he would always promise.

Thus, I took the presence of a professional photographer with three cameras hanging from his neck as essentially a threat that night in the Owl Farm kitchen. If the picture in the London Observer or the The Sun wasn’t just right, I would pay.

Suddenly, there was a loud commotion on the front porch where the peacocks were huddled in their walk-in cage under a heat lamp. A huge THUMP was followed by the peacocks screeching wildly. I figured that a slab of snow must have slid off the roof and startled the birds. Deborah immediately went to investigate, and I was close behind.

On the front porch, the peacocks were going crazy inside their cage. The door to the cage was open, as usual so they could come and go, but there was something else inside with them now. A mangy bobcat was leaping from the floor of the cage, trying to grab one of the screaming peacocks whirling on their perches above.

“You asshole! Get the fuck out of here,” screamed Deborah as she charged at the bobcat.

You could see how this fearless woman could protect Hunter all those years, and even take a bullet for or from him (see once again my story “Never Call 911″ But, the bobcat seemed to have no fear whatsoever. Instead of running away, the cat charged Deborah, coming after her quickly and driving us both back into the living room. The Cat was either rabid or simply crazed by hunger and the cold.

“It’s a bobcat,” screamed Deborah to Hunter. “Get the shotgun!”

I slipped back onto the porch, thinking I could drive the bobcat off before Hunter got the gun and ended up pictured on the front page of London newspapers the next day turning a cat into pink mist, alienating every animal lover in the United Kingdom. The peacocks were still screaming, but the bobcat wasn’t in their cage or on the porch. Then I saw him peeking around the side of the woodpile just off the front of the porch.

At that moment, I heard the unnerving sound of the pump action on the 12 gauge Marine Defender behind me as Hunter came out the front door screaming, “Where is he? Where is the son-of-a-bitch?”

Unfortunately, I hesitated just long enough for him to know I was lying when I replied lamely, “I don’t know.”

His voice took on a tone of threat I had never heard before as he swung the chrome plated barrel in my direction and screamed, “Tell me where he is, or I’LL SHOOT YOU!”

“He’s right there. Behind the wood pile,” I shouted, instantly, giving up the bobcat whose head disappeared behind the woodpile just as it exploded in a torrent of wood chips from the double O shot of the Marine Defender. That was one quick cat. He ducked the shot and simply disappeared.

“Protecting a ‘poor pussycat.’ You sentimental fool. It was a bobcat that killed my beloved Screwjack,” he declared with angst. Giving me a look of disgust, he pumped the Marine Defender once to clear the weapon and went inside.

Screwjack was both the name of his black house cat, and a satirical short story about his love affair (literally) with a black cat (see this excerpt from the supplement on my “Breakfast with Hunter” DVD in which the writer P.J. O’Rourke and the actor Don Johnson take turns reading Screwjack).

Clearly, Screwjack was an attractive cat, as this post card picture that Deborah took and then sent to a few friends on his death attests. The theory of his demise was that vermin from bobcats with whom he tangled infected him with a deadly disease. 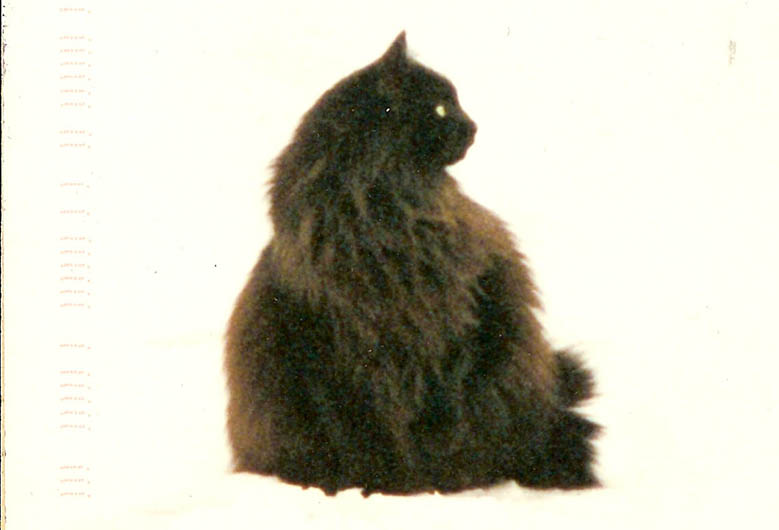 Unfortunately, Screwjack was pretty elusive, and in all my years of filming Hunter I took few, if any shots of his black cat. However, Screwjack does have a cameo appearance in “Breakfast with Hunter.” You can hear him distinctly whining in the background as Alex Cox and Todd Davies flee the kitchen after their infamous Fear and Loathing in Las Vegas script conference that led to Terry Gilliam directing the movie.

Back on the porch, I thought about the error of my ways and figured perhaps I could redeem myself by shooting the bobcat. Taking another shot gun from the arsenal, I stalked the property in the cold, hoping to see the varmit and blast him away. After an hour or so, feeling like a bad imitation of Bill Murray in Caddyshack, I quit for the night. At least I didn’t blow up the 500 gallon propane tank with an errant shot.

The next afternoon I got a call from Deborah.

“He shot the bobcat,” she proudly declared.

“I was walking over to the main house and saw the bobcat sitting in the bushes above the firing range,” she said. ” So I went into Hunter’s bedroom. He’d only been down for a few hours. But still I whispered in his ear: ‘If you get up now you can shoot the bobcat.’ And, Damn if he didn’t pop right out of bed, grab a rifle, and kill that bobcat with one shot from the front porch. Then he went right back to bed and fell asleep.”

Usually, it took Hunter hours to get going in the morning – an ugly ritual documented by more than one observer. But, given a score to settle with a bobcat, anything was possible, including getting Hunter into the great outside.